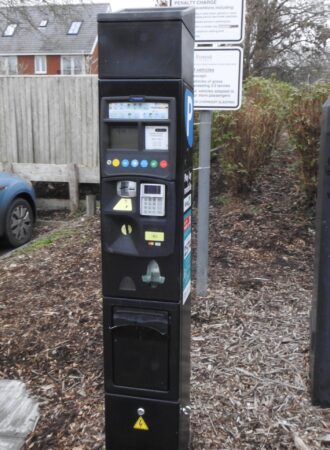 Full marks to the member of the public who turned up (virtually) to complain about parking problems in the town and to ask about permits to reserve parking. Very few people make the effort to attend meetings, even for issues that they feel strongly about.

At the meeting itself, Conservative Councillors were very keen to disassociate themselves from the decision of the Conservative controlled New Forest District Council to start charging in all Totton's NFDC car parks.

One of them, who is also a District Councillor, claimed that he had tried hard to persuade his fellow Conservatives not to impose charges and to delay charging, if not. Unfortunately, he didn't vote against the Conservative policy or even say anything when it came to the decision making meetings. Neither did any of the other Totton District Conservative Councillors.

I made the point that the Town Council car park spaces (which are free for 5 hours), quickly fill up, whereas very few people park in the District Council managed car parks. I predicted that the situation with businesses suffering and card being parked on nearby residential roads will only get worse, especially when the threat of Covid diminishes.

Yes, I got accused of electioneering for my troubles. It is not as if I have suddenly jumped on a bandwagon. I have supported free car parking in Totton for over 25 years, at election time and outside election time. I think I know what people want. I think I know what is best for local businesses and for residents who would rather have a few parking spaces outside their homes.

The other I can claim is that I have done more to explain what was being planned and the reasons behind it than any of the Conservative members who pretend that this is not their responsibility.

Time will tell how bad the policy is. I just hope we don't see any of the hard pressed local retailers going out of business because of it.

CAR PARKING CHARGES DEBATE Well, last night’s meeting of New Forest District Council finished quite abruptly at 10pm, without finishing all the business. I must say I was a little bit conflicted, but having spent eight hours in meetings yesterday, I was getting a bit tired and frazzled. As Leader of the opposition group, I…

I will try and retain free car parking charges in Totton and other New Forest towns for a six month period, to help local businesses. As Opposition Leader, tonight, I will propose an amendment to the budget, to bring this about. The viability of local businesses is more important than the Council keeping more reserves…

TALK FOR THE AMBASSADORS I am pleased to have been invited to give a talk tonight to the Ambassadors of the 70/30 campaign, an initiative that sets out to improve the life chances of children through early intervention. I often provide examples of “false economies”, where I think Council cuts lead to much greater costs…

CAR PARKING CHARGES BID On Thursday evening, I get the chance, as Leader of the…

CAR PARKING CHARGES BID On Thursday evening, I get the chance, as Leader of the Liberal Democrat Opposition group on New Forest District Council to make a speech and propose an alternative to the Conservative budget. Finances are not in a terribly healthy state and there is, these days, very little room for offering anything…

UGLY BUT WORTH KEEPING Nearly 2,500 people have signed the petition to save this Calshot toilet block from demolition. I personally think that it makes no sense to close it. Calshot is a very popular venue, especially during the summer months. You would have thought that the Conservatives running the District Council might have considered…